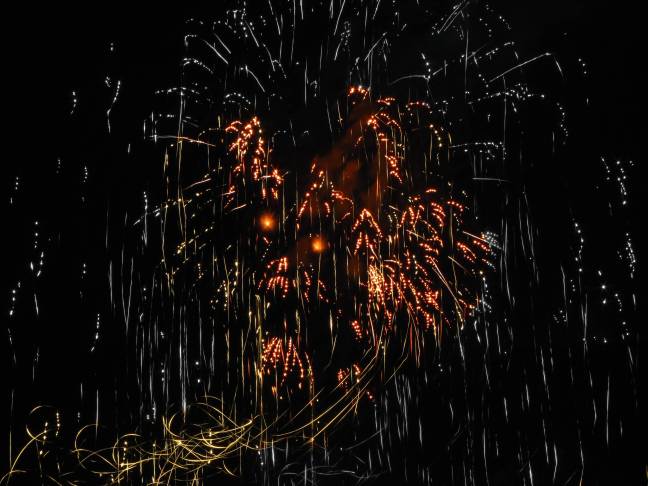 I wasn’t going to post a blog for the changing of the year, but then on the 2nd I realized I had already written one that I had forgotten about. I debated waiting until next year to post it, but let’s be realistic. If I forgot about it a week after I wrote it, am I really going to remember it next year? No. No I am not. Sure, we have technology and I could set any number of reminders, but I don’t think many people are reading this anyway, so I might as well just throw it out there. If you were planning to make your New Year’s plans based on my blog, many apologies. You could set yourself a reminder to read it again next year. 🙂

Some people like to celebrate New Year’s with fireworks, champagne, and kisses at midnight. Or maybe there’s a resolution you’ve been saving up, because who wants to better themselves on any of the other 364 days that come around each year?

Sure, these things have their place, but do you know what would really make this holiday special? Costumes. And ghosts.

Yes, I know Halloween is over until October, but does it really have to be? Let’s face it. Half the things people wear on New Year’s Eve are pretty close to being costumes already. Or, were you going to wear those shiny pants and sequined top to work next Wednesday? No? Didn’t think so. And where did that guy even find a diaper and bonnet that fit him? Good thing he’s drinking so much, otherwise he’d be freezing.

So go ahead and wear a costume. Throw on some cat ears and a tail with your leopard-print outfit. Put on some antlers and greenery, you beautiful pagan god or goddess. And who cares if there are three different versions of Father Time and Baby New Year at the party? Make yours steampunk. Or zombify it. Get creative. The ghosts will love it.

Ghosts LOVE winter. Why wouldn’t they? It’s dark. So dark. At least, in many parts of the world (apologies if you’re reading this from the southern hemisphere). In some places, it’s not even that light when the sun is out, because on top of the shortened days, it’s also cloudy most of the time. I’m in Ohio right now, and when I wrote this originally, I couldn’t remember the last time I had seen the sun or a blue sky. The weather hasn’t been great for nature photography or other outdoor activities, but the ghosts are loving it. It’s like summer vacation, but with cold weather. And, once you don’t have a body, who cares about the cold?

The ghosts may begin their party on All Hallows Eve, but that’s just the start. The shortest day of the year is the winter solstice, around the 21st of December. That’s much closer to New Year’s than to Halloween. The ghosts are definitely still here…assuming they ever leave at all.

So, what do we do about it? You could panic. That’s always fun. Bust out the sage, or call a priest, or whatever it is you do when you’re pretending you can fight something you can’t see. But I prefer a kinder, more inclusive approach. After you kiss your lover, or random stranger, at midnight, take a moment to send a loving thought to those who are no longer with us. That alcohol you’re guzzling with your friends and loved ones? Pour a glass for the spirits of the departed. And please, call an Uber, or Lyft, or friend so you don’t join the departed too soon.

Of course, there’s always the option to use this time of darkness to communicate with the dead. Perhaps your new New Year’s traditions should include dowsing rods or a Ouija board.

No matter how small or how elaborate the gesture, I’m sure the ghosts will appreciate it.

And since it IS the season for resolutions, keep in mind you have a whole year to let the spirits know you’re thinking of them. You can always resolve to make this coming year as spooky as possible.

I certainly hope you do.

Do you have a not-so-traditional New Year’s tradition? I’d love to hear about it in the comments!

This is a text widget. The Text Widget allows you to add text or HTML to your sidebar. You can use a text widget to display text, links, images, HTML, or a combination of these. Edit them in the Widget section of the Customizer.

What have I read lately?